What is the History of the LPJS?

When should you start competing?

Why the Leon Paul Junior Series?

What do you need to compete?

How does the Points & Rankings work?

How do I claim my prize at the end of the season?

Can I fence out of age group?

Do I need to have an LPJS Passport to fence in an LPJS competition?

What is my LPJS Number

Back to top What is the History of the LPJS? The Leon Paul Junior Series (LPJS) was started in 1986 by Barbara Paul (the wife of Raymond Paul) and involved a couple of foil competitions in London. Back then there were simply no competitions for young fencers. Thirty years later the LPJS involves events all over the UK in all three weapons. It has become the mainstream introduction to competitive fencing for nearly all youngsters. During the last 5 years there have been 15,000 entries into hundreds of different events.

Back to top Who runs it? The Leon Paul Junior Series competitions are organised locally but sponsored and co-ordinated as a series by Leon Paul Fencing Equipment. Entry fees all go to the local organisers, to help fund the running of the competition and support Clubs. Leon Paul donates over £20,000 every year to the running costs of the series, including prizes, medals, LPJS Passports, pistes, scoring equipment. Of course, there is a dedicated LPJS website with results, rankings and a full calendar. We are constantly striving to improve children's experience of the LPJS and to support the grassroots volunteers who put in so much work for the future of the sport.

Back to top When should you start competing? 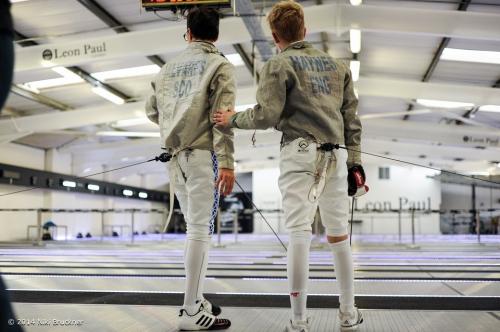 It's not an exact science and everyone will vary. Generally, we find that it is helpful to have been attending a club regularly for at least six months and to have had some experience of 'electric' fencing. When to start competing is not an exact science. It can be helpful to enter a first event that doesn't involve too much travel and ideally to be going along with someone else from your club. However, don't hesitate if you feel ready and there's an event in the calendar. If you wait until you think you can win, you will probably have waited too long. Remember while you are practicing and perfecting your skills, there are other fencers out there doing the same thing but getting competition experience at the same time. They might not be winning, but they will be improving much, much faster than by club training alone. Fencing is a duelling sport and the natural context for it is the competition piste. Its a real milestone to enter an LPJS and a great way to make new, and we hope longlasting, friendships.

Back to top Why the Leon Paul Junior Series?

The LPJS is widely recognized to be the best national format series provided in the UK for introducing children to competitive fencing. With events held all over the country, there should be at least one competition fairly close to where you live. Some fencers choose to attend just one or two competitions each year, while others will compete in several, trying to collect LPJS points needed to climb up the rankings. LPJS competition results are also eligible events for the selection schemes operated by England Fencing for their U13 and U15 Squads.

LPJS competitions are therefore broad spectrum with fencers of widely differing standards competing; some are relative beginners and others may be on the edge of national youth teams. At the LPJS International in London, we see children visiting from all over the world. Although we do have a ranking system, ALL of these events are about participation and inclusion. The organisers are used to welcoming new fencers and their parents. Many can tell you stories of the nervous first timers who persisted, trained hard and later became senior internationals. They will be happy to explain the procedures and format of the tournament to you.

Back to top What do you need to compete? 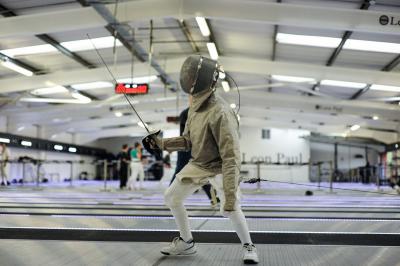 A complete set of kit for a competition would comprise (starting from the feet and working up):

Please note that electric foils, body wires and lames can often be borrowed from your club. Check with your coach or armourer. Complete starter kits comprising everything you need are heavily discounted by Leon Paul and currently priced around £280 - £420 depending on weapon. Visit www.leonpaul.com for more details.

Back to top How does the Points & Rankings work?

Everyone who has competed in at least 1 LPJS competition in the year will have a LPJS ranking. You can find your ranking on the LPJS website.

At the end of the season the LPJS Points from your best 4 competition are added together to make your points total. If you have entered more than 4 competitions in the year you ignore the lowest scoring events.

Back to top How do I claim my prize at the end of the season?

At the end of the season, the top 8 fencers on the rankings in each weapon and age group receive a prize. However to receive your prize you will need to claim it. To do this, follow the instructions below:

The deadline for claiming prizes is the 31st January. Leon Paul will then process all the claims and start sending out the prizes. This can take up to 6 weeks as there are about 240 prizes in total.

Back to top Can I fence out of age group?

Yes you can. Should a fencer wish to, they can enter the age group above, but not below, their current one. For example, an U11 fencer might want to fence in the U13 age group to gain extra experience. This is OK as long as the timings of the event allow. Please be awear however that fencers will not receive any ranking points for results achieved out of age group.

Back to top Do I need to have an LPJS Passport to fence in an LPJS competition? 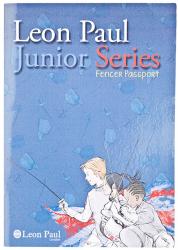 When a new LPJS fencer registers on the website and creates a profile, we send out a LPJS Passport free of charge. The LPJS Passport is a physical record of their LPJS fencing career. Inside the Passport there is some helpful information about the LPJS for both fencer and parent.

When the Passport arrives the fencer should complete their personal details page and attach a photograph. However, there is also a green competition section which is blank. Don't fill this out! It will be done for you by competition organisers.

Back to top What is my LPJS Number

This is a unique identification code for the LPJS. It consists of your initials, first name followed by surname then your date of birth in the format ddmmyy. Finally your sex, either M for male or F for female. For example director of Leon Paul, Ben Paul, his date of birth is the 2nd of July 1980 and he is male my unique code is BP020780M. Your LPJS number will be generated automatically when you enter LPJS events online through the LPJS website. You can then copy it into your LPJS passport if you are unsure.

Back to top Foil - epee - sabre, what's the difference?

Each weapon has its own distinct 'character' and resulting pace of action. The foil used by fencers today is the modern version of the original practice weapon used by nobility to train for duels. To score hits with the foil, the fencer must land the tip of the blade on a valid target: along the torso from shoulders to groin in the front and to the waist in the back. This area is covered by a metal threaded jacket called a lamé. In foil, the arms, neck, head and legs are considered off-target. Off-target hits will temporarily halt the fencing action, but do not change the score.

In foil, when both fencers register hits together it is the job of the referee to phase the actions and award a point. The referee will apply the 'right-of-way' rule. The fencer who started to attack first will receive the hit provided it landed on target. The person who was being attacked should have defended themselves and, in real life duel, would have made a fatal mistake. You don't live long in a duel by running onto your opponent's blade once they have established their attack. Only if the fencers both start exactly together will there be no separation of the hits by the referee. As the epee (pronounced 'EPP-pay') evolved, the idea was to develop epee fencing in a manner that reproduced as closely as possible the conditions of an actual duel to first blood. As a result, in epee the entire body is considered a valid target. Epee fencers score a hit by hitting their opponent first. If the fencers hit each other within 1/25th of a second, both receive a hit - this is commonly referred to as a double hit. The lack of right-of-way combined with a full-body target naturally makes epee a game of careful strategy and patience - wild, rash attacks are quickly punished with solid parry-ripostes and counter-attacks. So, rather than attacking outright, epeeists often spend time probing their opponent's defences and manoeuvring for distance before risking an attack. The sabre is the modern version of the slashing cavalry sword. To simulate a cavalry rider on a horse, the target area is the entire body above the waist, excluding the hands. In addition, sabre employs rules of right-of-way, which are very similar to foil, but with some subtle differences. Like foil, the fencer who starts to attack first is given priority should his opponent counter-attack. However, sabre referees are much less forgiving of hesitation by an attacker. Another major distinction of the sabre is that sabre fencers can score with the edge of their blade as well as their point. The sabre fencer's uniform features a lame jacket, which fully covers their valid target area and because the head is valid target area in sabre, the masks are also electrically wired.


Only if the fencers start attacking exactly together will the action re-start without a point being awarded by the referee. Unlike foil, off-target hits do not register on the scoring machine, and therefore do not halt the fencing action. It's fast and furious!