All entries to all LPJS events need to be made through the new LPJS website. You can on longer enter via post or on the day of a competition. When you have found a competition you wish to enter on the calendar then click on the link where you will find further details of the event. You will be able to enter the completion from the competition information page.

Check the age categories carefully. Fencing age groups are based on ages from 1st Jan to 31st Dec in the current year. It is not the same as school year groups. The best way to be sure of the position is to check your fencer's year of birth with the table on the home page of the website.

You can choose to enter competition on the LPJS website by entering your details as a 'guest' or you can create an account and profile. The advantages to creating an account is that your competition entry details will be saved so that when you want to enter any LPJS competition again in future you don't have to retype all your information. An account will permit your competition entry to be done with just a few 'clicks'. You will also have a profile page showing your previous results and current ranking along with a list of saved competitions you were thinking of entering. You can also personalize your account by uploading a photo. You can choose to have your profile visible so other fencers and your friends can see your results and ranking or you can hide your profile page. Finally, but certainly not least of all, by creating an account you will be sent a LPJS Passport free of charge. All the fencers in the competition are then put into groups of 5, 6 or 7 fencers. These are called 'poules'. You fence everyone in your poule once. The winner is the first to 5 hits or the fencer in the lead after 3 minutes (2 minutes for U9s). If the scores are drawn after time has run out then there is an extra minute of fencing with special rules, called 'priority'. The results of the poules matches are used to decide your seeding for later rounds of the competition, so it's important to try hard in all your matches for every point.

There is usually a competition notice board located somewhere in the fencing hall, showing the poule allocations and, later, the results. Some competition may even have information live on the internet so you can view them on your smart phone.

Warm up thoroughly before your first bout. Fencing normally start about 15-20mins after check-in closes.

Remember 'Fencing Etiquette'. Salute your opponent and the referee at the beginning of the fight and shake hands at the end. 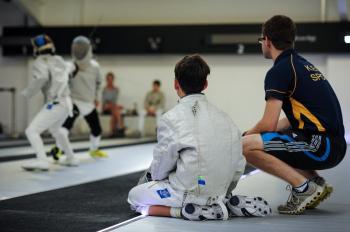 When you are not fighting, stay near your pool. Fights can finish very quickly and referees get annoyed when fencers vanish!

If you don't understand a decision, ask politely for the referee to explain it, but don't argue.

At the end of the poules, check the poule sheet to ensure that your results are recorded correctly. If the results are correct, sign the poule sheet, if they are incorrect don't sign until they have been corrected! You will have to check the poule results again on the notice board to make sure they have been entered into the computer correctly. You normally only have 5 minutes for the results being posted to notify the organisers of a mistake, so stay sharp!

After the poules have finished, the competition will then progress to direct elimination matches. These are knock out matches fenced to either 10 or 15 hits depending on our age. Normally, there will be three periods of 2 or 3 minutes (depending on the age category). Again, if scores are tied at the end of the final period then there will be an extra minute of priority to decide the winner. Always remember 'Fencing Etiquette'. Salute your opponent and the referee at the beginning of the fight and shake hands at the end. Sometimes the coach of the other fencer will shake hands with you and your coach after the match; this is fencing tradition and a show of good sportsmanship. Fencing is a sport with high standards and there are great opportunities to make friends. Parents and coaches can only coach or advise fencers before a fight or during the 1 minute break of a direct elimination match. When the fencers are actually fencing a match, coaching in not allowed from the side of the piste. If the referee thinks coaching is taking place during the fencing they will ask the coach or parent to stop. If the coach or parents fails to stop coaching during the fight the referee has the power to ask the parent to leave and the organisers may exclude the parent entirely.

The penalties handed out are the same for all weapons. Mostly, you will see Yellow and Red Cards. These cards can be awarded for a wide range of technical reasons as well for misbehaviour. If it does happen, listen to the referee's explanation. Penalties are not the end of the world and, unlike football, a red cards does not mean you are being sent off! No immediate penalty point is awarded against the penalized fencer but if there was fencing taking place when the offence happened then any hit scored by them doesn't count. Once you are on a yellow card then any subsequent penalty will result in a red card. An example of a yellow card offence would be coming to the piste with a weapon that fails inspection or setting off from the en garde line before the referee gives the command.

Red card = A point is awarded against the penalised fencer.

A second yellow card action in the same bout results in a red card and a penalty point being awarded against the penalised fencer. For example, a fencer who comes to the piste and whose first two weapons fail inspection will get a yellow card for the first failure and a red card for the second failure. The red card will be a penalty point - the fencer will have to get a third weapon and start the bout 1-0 down. Always check all your weapons before starting a competition and have a spare one handy!

If a fencer receives a black card he/she is kicked out of the tournament and must leave. The penalised fencer will be scratched from the event and his or her result will not count towards their ranking.

An example of a black card offence would be insulting a referee, or throwing down a fencing weapon or mask on the piste. Black cards can be issued to fencers, coaches or spectators. All black card incidents MUST be referred to British Fencing who will decide whether further action or penalty is required.

When you have finished fencing you can either stay to watch the competition or leave. Even if you go out early, there is much to be gained from watching some of the more proficient fencers at the event. It may not be so long before you fence them again.

If you finished in the top four places, don't forget to collect your medal!

The results of the competition will be online a few days after the event and your updated LPJS ranking. 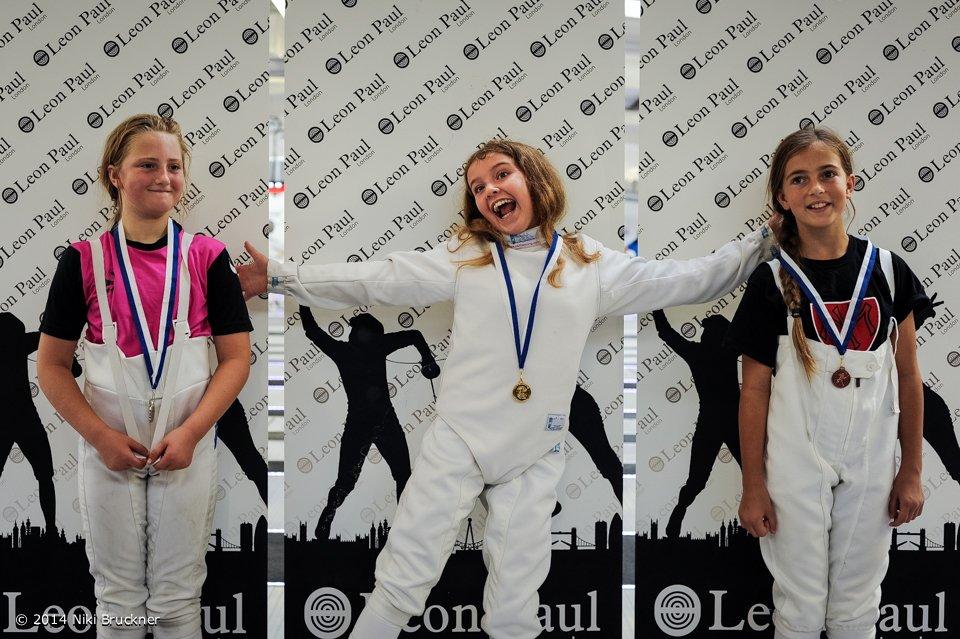 Take along plenty of drinks. Fencers get hot in all that kit, and children dehydrate quickly, without realizing it. Fencers sometimes find it hard to eat during competitions but bananas, dried fruit and cereal bars provide good sources of energy.

The organisers of events will require that any person wishing to take photographs or video at the competition produces identification and signs a registers before doing so. The photography register is usually at the entry desk or DT. If you are concerned about photography taking place, please contact the organisers who will be pleased to discuss the matter with you.

Please always be considerate of the fencers and officials when taking photographs. Do not distract them or disrupt the progress of the competition. For reasons of safety, fair play and courtesy, never take a flash photographs when a fight is in progress nearby.

Whilst both Leon Paul and the organisers of each individual event within the LPJS make every effort to ensure that the competitions are safe and secure, the responsibility for the welfare of the child remains with their parent/guardian or nominated responsible adult (typically a coach or another adult relative) in attendance. If you bring a child and need to leave for any reason please ensure that the organisers are aware of the responsible adult who will be looking after your child in your absence. The organizers cannot do so.

If your child fences foil or sabre, and you are new to fencing, ask someone to explain the 'Right of Way' rule. Inexperienced parents can get upset when their child's light comes up before their opponent's, but the hit is given against them! Understanding how hits are awarded will help you to give your child helpful advice and support. It will also make the experience of watching the match less bewildering.

To the uninitiated, watching fencing can be difficult and downright frustrating. Winning and losing actions are not always that obvious. It all looks the same.

If you are a fencing beginner (or a parent), watching fencing bouts is one of the best things you can do to familiarise yourself with the sport. A little understanding of basic concepts will go a long way. It will take longer to appreciate all the complexities of modern fencing but patient spectating at a well run event will have you fit to dispense some useful advice to your future world champion in no time at all.

Remember, as in all parenting, to set an example by showing courteous and sporting behaviour, appropriate to a children's event. Standing at the side of the piste shouting angrily will not help.